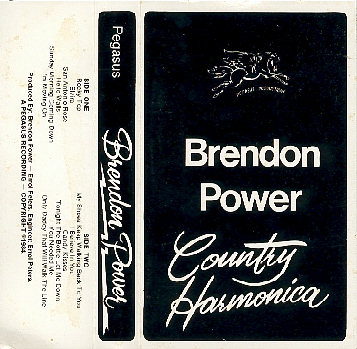 Due to my early interest in country and bluegrass harmonica, I ended up playing on several albums by New Zealand country singers in the 80's (Patsy Riggir, Howard Morrison, Brendan Dugan etc).

As a result, in 1983 Erroll and Ginny Peters asked me to do a harmonica instrumental album of country tunes. They had been to Nashville, and bought a whole swag of pre-recorded backing tracks intended for singers to record over. The tracks had the lot: rhythm section, piano, guitars, pedal steel, solos - and even pre-recorded backing harmonies! The idea was to substitute the harmonica for the lead vocal, and release the result as an instrumental album. It was a chance to work on a solo album project in the studio for the first time, so I set to work learning a whole lot of country classics and arranging them to fit the backing tracks. I enjoyed the challenge, as it really stretched my technique and knowledge of the harp.

Everything would have been great except for those accursed backing vocals, as the songs were pre-mixed to-two track and they couldn't be removed. So the harmonica would be flying along in some flurry of notes, and then in came those Nashville chicks doing their oohs and aahs! Kind of distracting during the recording process, but they give the finished product an endearing kitsch quality all its own.


Despite the tackiness of the pre-recorded tracks, I'm proud of the harmonica playing - quite advanced for diatonic harp at that time. It was all done using home made 11-hole harps in my first original tuning, Regular Breath. You can see photos/info on the harmonicas and tuning here.This album was only ever released in New Zealand in 1984, on cassette in a small batch, and no more were made.