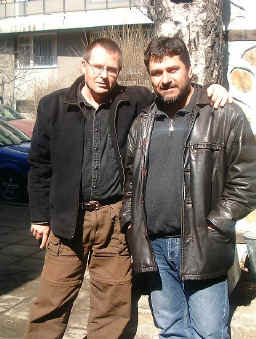 During my time with the Riverdance show, I became good friends with GEORGI PETROV, a Bulgarian master musician in the band. He introduced me to Bulgarian folk music, patiently demonstrating the complex rhythms and scales - often assisted by generous doses of rakia (the potent Bulgarian fruit spirit). After a while I tentatively started to transfer my growing understanding of the music onto the harmonica, an interesting challenge! I learned some traditional tunes and even started to compose my own Bulgarian-style original music.

One night after several rakias we decided to make an album together! Thus it was that in the summer of '99 I flew to Sofia, Bulgaria for two weeks of cultural and musical adventure: a week of recording and a week travelling and meeting the big-hearted people of that great country.

Georgi organised the sessions and plays brilliant gadulka. The other Bulgarian players were top names on their instruments, including Nedyalko Nedyalko (kaval), Angel Dimitrov (tambura and electric guitar) and Peyo Peev (keyboards). Along with the astonishing musicians and singers Georgi recruited from his home country, we were also joined by Ray Fean, the noted Irish rock drummer.

Much of the music was composed in the studio, and this gave the whole project an on-the-edge immediacy that bursts through on the recorded tracks. Everyone felt the collaboration was a real success, drawing on the strengths of quite different musical backgrounds to create a unique synthesis. As yet there is no CD release of this material. However, you can download the MP3 album.

R.I.P. GEORGI PETROV
Very sadly Georgi died in 2014, a huge loss to all who loved him and the whole Bulgarian musical family. Here is the great man playing live along with most of the musicians and singers on the album.